Most Greeks have either “My Island” or “My Village”. For us Poros has become ‘My Island”, probably because it is close enough to our family roots in the Peloponnese, but mostly because we have been welcomed there for many years by some very close friends. They have taken us into their family and included us in many events. We are so fortunate!

Poros is a short ferry ride from Piraeus. Close enough for a day-trip. And it is just a stone’s throw from Galatas in the Peloponnese. A day-trip to Epidaurus, or Mycenae is entirely possible.

Like everywhere in Greece, people like to sit for hours over a cup of coffee, or drink ouzo and eat grilled octopus and other mezes at a very leisurely pace! Everything starts later. There is no such thing as 7:00 in the morning, and meeting in the afternoon usually means at 5:00 or 6:00. Ask a friend where you will meet for coffee tomorrow and they will say at the port…or at the corner…and “I will look for you”. Ask them what time and they’ll say “in the morning”. Plans are rarely more firm than that! The summertime routine will include swimming, followed by a nap…then coffee in the afternoon! And a light dinner about when you should really be going to bed!

In Poros one must enjoy the simple routines that are common around Greece. But to enjoy them on Poros…now that is something different indeed!

Early morning ferry to Poros – on a brilliant day!

In town on Easter Sunday – our last night. Galatas is just opposite…a few hundred meters away.

Kids at the beach in Askeli. 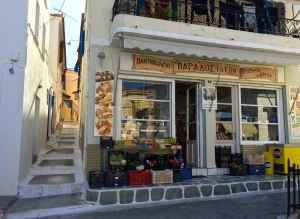 High up in the village – Poros.

In March 2015 I had a few days in Amsterdam and stayed at the wonderful Andaz Hotel in the Prinzengracht Area. Located in a beautiful area – perfect for walking and bicycling along the canals, and visiting the museums and so many wonderful small shops. Small shops with unique items and many of them handmade!

But the Andaz! It was amazing, with wonderful rooms; art in the rooms and throughout the hotel, great service, and great food. Usually hotels have a fault or two, but none were evident at the Andaz! The room was an open plan with the sink and shower in the room, and only the toilet and walk-in closet were separate from the room.

Too bad it was a weekend of all day meetings and too bad it rains cats’n’dogs in March in Amsterdam! Still lots of fun!

Hanami is an age-old Japanese celebration of Spring. People throughout Japan authoring under the flowering cherry and plum trees with food, drink and friends to appreciate the fleeting nature of the spring blossoms. Hanami is essentially the Japanese ‘preview of spring’. This theme invites us to be present in the moment, aware of the temporal beauty of nature and its diverse expression in the plant life of the natural world.

I had the pleasure of seeing this show on February 28th, in Greenwich Connecticut. Presented by the Green Fingers Garden Club, the show is a Major Flower Show of the Garden Club of America.

Walking in San Francisco yesterday, I stumbled across a number of succulent gardens in Haight Ashbury. You must look closely to see the color!

Sails of the Bay by Marius Starkey, 2014

Art in public spaces! Truly a gift for all to enjoy. These heart sculptures are sponsored by the San Francisco Hospital Foundation. Produced by a host of different artists, including Tony Bennett, there are more than 120 of them. Many are in private collections and not available for viewing. But each year new Hearts are displayed at Union Square and around the city. A number of Hearts from past years can be found around the city although there is no list anywhere to help people find them. The first was found at the Lyon Street Steps, and the others at Union Square. I get help from a number of Heart Spotters, like Mary, Claire, Bill and Beth, and others. Thanks Heart Spotters! See more Hearts at: http://www.thomaspappas.com/Home/SF_Hearts_Project.html

Finding a tranquil space is a wonderful thing! James Turrell’s installation at the DeYoung is certainly a tranquil space. Even when children come bustling in and are full of excitement, they recognize it as a special place and usually become very silent if others are sitting quietly.

Entering the outdoor space at the museum is free, as is the observation tower. Once in the outdoor space, take a stroll through the small grove of black bamboo and you will enter the dome by means of an encompassing pathway. Be prepared to spend a few minutes in thought once you arrive!

The crowd at the Star Stage enjoys Natalie Maines on Saturday!

It is hard to believe this free event even exists! Yet each year since 2001, thanks to Warren Hellman, Golden Gate Park swallows up a mass of humanity and somehow everyone gets along together while they enjoy great music, sunshine and the type of camaraderie that only a magical event like this can inspire!

This year about 800,000 people attended over the three days. 84 acts performed on the 6 stages, and the police reported just two arrests! I always remember my out of town guests in 2011 remarking to their friends back home that after Emmylou Harris closed the festival, as she has done every year, people started picking up after themselves before leaving. Well of course! Warren Hellman expected his guests to take care of the park, and that is what people do every year.

Each year I think about all the hassles of getting into San Francisco, finding parking, and dealing with the crowds…and sometimes I almost lose my resolve to attend. But the moment I arrive, and settle back to enjoy the event…and all the people, I know I have arrived and I wouldn’t miss it for the world!

Visit the festival site at: http://www.hardlystrictlybluegrass.com

It is sad to note the passing of Dick Newick. One of the greatest yacht designers, Dick designed many revolutionary winners. Trimarans like ‘Third Turtle’, ‘Moxie’, and ‘Three Cheers’, and the proa Cheers. Always very fast, they weren’t designed to any rule other than seaworthiness, speed and good handling! And in the hands of good skippers they went on to win races like the Singlehanded Transatlantic race, the Route de Rhum, and others.

Dick always said there are three design parameters, but most clients would have to choose two of the three…speed, comfort, low price. And he was right, you simply can’t have all three, so he normally chose to put comfort aside. But in fact, when a person faced up to the realities of ‘comfort at sea’ in a small yacht, he would come to realize that Newick designs were surprisingly comfortable! And besides, what could be more comforting than to get to your destination so much faster!

I had the pleasure of owning both a Tremolino and a T-gull, and my days aboard the 23′ Tremolino in particular, provided great joy in the pure pleasure of sailing fast in a small boat with little effort and quite a lot of control. Touching 20 knots more than once, I came to appreciate the more comfortably fast speeds in the 10-14 knot range, and how often those could be enjoyed in surprisingly comfortable wind and sea conditions! The photo above is from 1987, when I enjoyed a great solo sail on Puget Sound, especially when I rigged the pole-less spinnaker, lashed the tiller amidships, and let the boat sail dead downwind without any fuss!

And Dick’s tremolino design gets most of the credit for my survival of the 1982 Double-handed Farallons race, a race which took four lives and a number of boats. Due to my bad judgement we (crew Bob Baker and I) pressed on towards the Farallons aboard ‘Rush’ as the weather from the southeast worsened. Going too fast as we sailed head-on into the growing Pacific swells, we tore the mainsail, and broke both dolphin-striker wires supporting the forward crossbeam. Fortunately it didn’t buckle! Light boats are easy to break and need to be slowed down early!

With a spinnaker sheet rigged from from side to side underneath the main hull to support the crossbeam, and only a roller furling jib available, we decided our best bet was to head off the wind and go north, and beach the boat on the coast. Now going fast into the Pacific swells had tested the boat’s buoyancy and even when the bow dug into green water back to the mast, the hull always bobbed to the surface! But as we headed north and put the wind on the quarter, the boat took off and began to surf down the waves, making quite some speed! As the boat surfed, we felt the rudder cavitate a number of times, rendering it useless. But the tremolino continued to behave well beyond the capabilities of her inexperienced crew. Finally, as dusk was upon us, we came into a slight lee at the west end of Drake’s Bay, beached the boat and left it there safely for two days when it was ultimately trailered home. It was a ride I’ll never forget!

Perhaps the best tribute to Dick Newick is to watch the video at the following link. Then you will have some idea of the grace and thrill of being aboard a Dick Newick trimaran!

Thank you Dick, and I wish you fair winds and following seas always!

note: The tremolo ‘Rush’ skippered by the previous owner Paul Mazza, was one of the first boats to ever finish the single-handed Farallons Race in daylight! 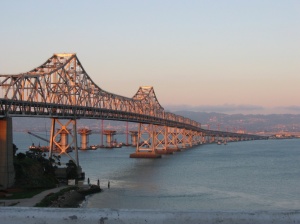 A long time coming! This photo is from 13 March 2005, and you can see the beginnings of the new span! Finally tomorrow it will open, and in a few years the old bridge will be gone!

Take the Bay Bridge heading west, and enjoy some of the most beautiful views you can imagine. Enjoy the view of the Transamerica building and the financial district; the steep hills of San Francisco; look out to Alcatraz and Angel Island…and Marin beyond! One day it might be as clear as a bell, with the big blue western sky above. Another day, and nothing but fog. and still another day, as the fog slides through the Gate it spares us a glimpse of something beautiful!

Heading east, enjoy the views of the Hills before descending into Oakland and past the Trojan Horses loading containers on ships. Don’t forget to point out the Campanile at UC Berkeley in case there are newcomers in the car. Survive the maze of possibilities to head north, east or south at the end of the bridge – no distracted driving allowed here – and then you are on your way!

Here’s to the new span! 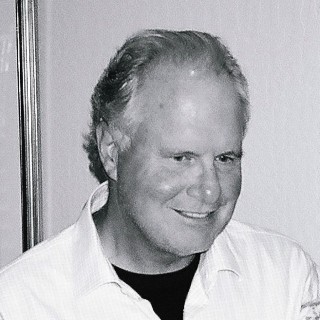